Following my recent controversial dilemma on the future of my Fujifilm 56mm f/1.2, I was lucky enough to have the opportunity to test out both the 50mm f/2 and the 90mm f/2 thanks to the lovely people over at Fujifilm. For those that haven’t read the post about the 56mm f/1.2 (it’s here if you want a read), I was genuinely tempted to trade it in for something that was a little more travel friendly eg the 50mm f/2. I was also tempted by the 90mm f/2 to replace the excellent portrait abilities.

For this post however we’ll concentrate on the 50mm f/2 and my short two weeks with it. Unfortunately, we got off on the back foot as I’d just had two weddings booked in this year and I absolutely love the 56mm f/1.2 for weddings; that was nearly my decision made already but let’s give the little lens a chance.

I arranged for the two week hire period to commence shortly before my first trip back home to see my family in months and shortly before a trip to Scotland for my sister’s birthday. Plenty of golden opportunities to test out the lens.

All photos throughout this post are JPEGs using the settings set out here! 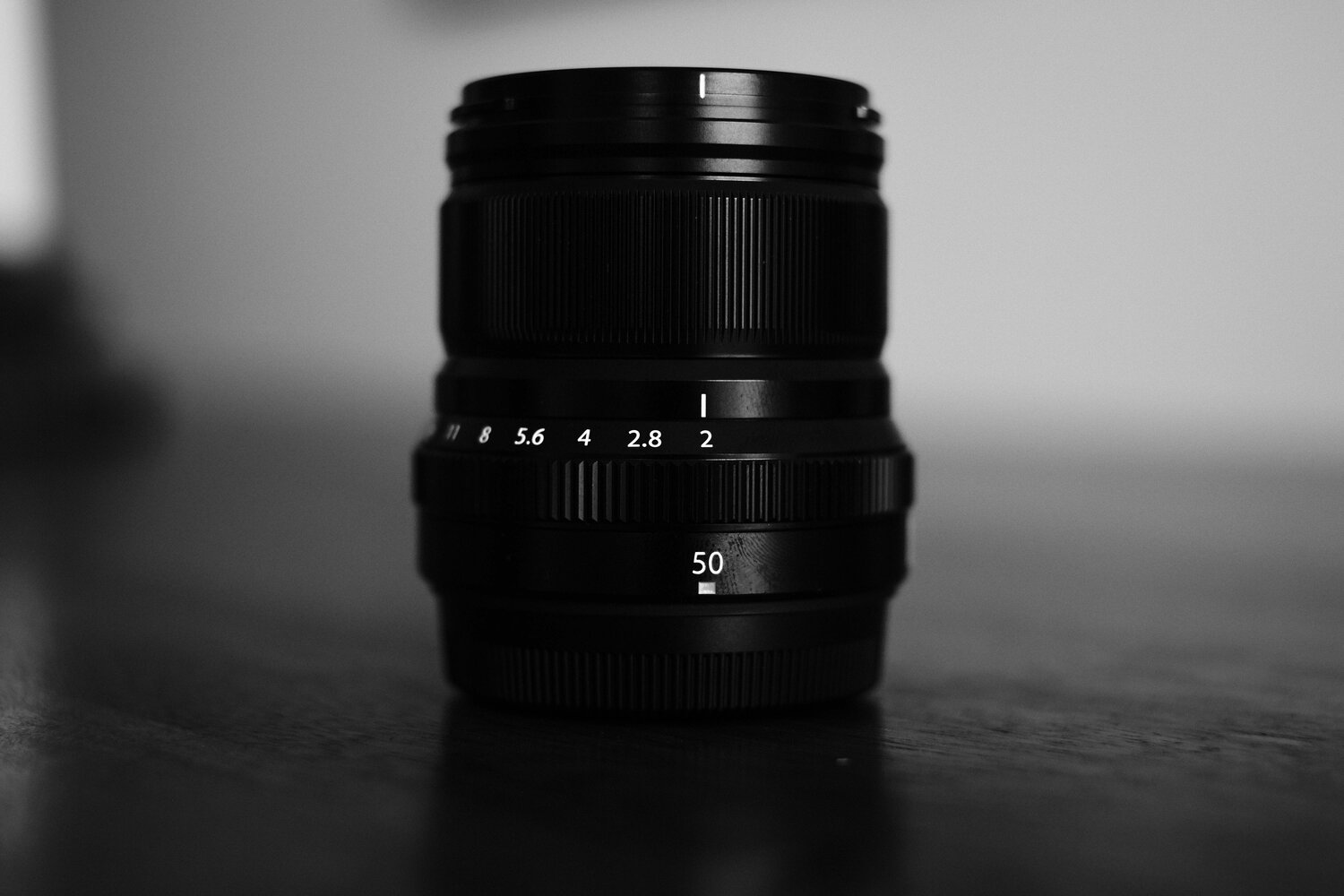 I bought into the Fujifilm system back in December 2016 following which I spent many months pondering the best lens setup for travelling Australia. Thinking back, I can’t even remember considering the 50mm f/2 or even being aware that it had been released. Initially, I settled upon the 10-24mm f/4, 23mm f/2 and the 55-200mm f/3.5-4.8. Even if I had been aware, I probably wouldn’t have been convinced to add it to my collection.

However, now that I’ve managed to have a play with it, I can certainly recommend this lens especially for travel photography. As always, I’m not going to go into masses of detail about the build quality and technical specifications; that’s readily available elsewhere. Here I try to just be as honest as possible about my experiences with the lens.

Firstly, I’m not entirely sure where this lens fits with an equivalent focal length essentially of 75mm. I did see a spate of Canon users purchasing the ultra cheap 50mm lens and then putting that straight on a crop sensor perhaps inventing this ‘close but not quite’ focal length. I admit, it is a bit strange but it’s essentially a short-telephoto lens and actually perfect for getting tight on city streets. This lens will really shine for tighter street and travel photography. It does work for portraits too though some will say that it’s not the typical portrait focal length of 85mm. Some say that that 6mm difference really does matter…

Where the lens really shines is with it’s super fast focusing. I mean, it’s practically instantaneous. I’m very much used to the 35mm f/1.4 at the moment and so I was a little shocked just how quick this lens could focus. This is more of what you would expect from a Fujifilm lens especially considering I’m using a five year old camera in the X-T2. I can only imagine how quick it would be on one of the latest cameras; probably focuses before your brain even thinks about it.

The lens itself is tiny, a little longer than the other Fujicrons (23mm f/2 and 35mm f/2), and really light so this will cause no issues whatsoever walking round all day. Even better, if the weather takes a turn for the worse, the lens is fully weather resistant so you can happily get soaked through.

You’ll have noticed that the 50mm is an f/2 whereas the 56mm is f/1.2 What that refers too, for those that may be new to photography, is the aperture; that is the opening in the lens (the lower the number the more light that the lens lets through to your sensor and equally the lower the number the less that can be in focus). f/2 is no slouch at all. With these modern digital cameras, you can easily bump up the ISO or shoot slower shutter speeds to make up for the slightly lower light gathering capability compared to more expensive lenses. I found shooting at f/2 brilliant and it was surprisingly much sharper than I had expected. One thing I don’t like about the 56mm shooting wide open at f/1.2 is that, as the focal plane is so narrow, you could easily have a nose in focus and not the eyes when taking portraits. I didn’t seem to have that problem at all with the 50mm f/2 and, as I said, it was perfectly sharp without having to get to f/4 for example.

In terms of bokeh, that’s the out of focus areas, I’m not one that really spends time purposefully comparing as to whether X lens is better than Y lens but, as I’ve suggested above, it’s more of just a feeling that I get. I could look at an image and immediately think “nah it doesn’t do it for me” or “that is insane” and there’s no doubt that it’s the bokeh that plays a part in that.

So without getting technical about shapes and aperture blades, what do I think about the bokeh that comes out of the 50mm f/2? It didn’t blow me away as much as the 56mm f/1.2, but I was very very impressed. For a lens that’s half the price, you’ll not be disappointed at all and it really does hold its own.

Unfortunately, I didn’t have chance to do a side by side comparison with the 56mm f/1.2 but, and this is odd forgive me, the ‘feeling’ was that I just couldn’t get any photos to live up to the ‘wow factor’ that you get from the 56mm. In my honest opinion, the image quality from the 50mm, to me, doesn’t compare but this lens isn’t designed to replace the 56mm at all. I can easily see a space in everyone’s collection for both; one for travel, one for weddings and portraits. You have to remember that the 56mm does have its downsides each of which the 50mm addresses perfectly.

Last but by no means least is the price; Amazon has it brand new for £409 or check out the used market (something I am constantly doing now) where MPB have it in the UK for just £359. Bargain.

All in all, a really good solid and dependable lens. Is it for me? That’s difficult to answer, I’d say yes and no if that’s even possible. If I had spare cash then yes there’s no doubt I would buy this lens. It’s great for street photography, for travel photography and is good for portraits too. However, my only worry is whether it would get a look in. My standard travel set up at the moment is the 16mm f/1.4 on one X-T2 and the 35mm f/1.4 on the other. My beloved 23mm f/2 never gets an outing anymore as those two lenses are just an absolute dream to work with and covers everything I need. I know for certain I would feel as though I was missing out if I didn’t have one of those lenses on.

What I don’t think I would buy the lens for is to replace my 56mm f/1.2 which was initially my intention. There’s something about that lens that I just couldn’t seem to get out of the 50mm f/2 and there’s no doubt that, with the lack of light in wedding venues here in the UK, I do really need that extra light gathering capability of the f/1.2.

If you don’t already have the 56mm f/1.2 or this focal length covered with another lens and are looking for something a little longer from Fujifilm, this lens is absolutely perfect and it will never let you down. It’s a brilliant little compact lens that will get you closer to the action without moving those feet of yours. If you combined this with the 23mm f/2 then you would have yourself a perfect set up.

As I concluded above, I couldn’t quite make my mind up as to whether the Fujifilm 50mm f/2 should be added to my camera bag. However, I recently made an attempt to use the 56mm on the streets of Newcastle and it quickly became apparent that that is exactly where the 50mm would excel. Whilst I don’t have any weddings booked in (and I’m not really sure whether to push that side of my photography anymore), I’ve kept the 56mm and still gone on to purchase the Fujifilm 50mm f/2. It’s safe to say that for street photography and travel photography the lens comes into its own. I love it. Like, really love it. Considering the size and the price, this lens is a powerhouse and I’m now convinced that it should be in every photographer’s camera bag!

Jamie Chance is a lawyer, photographer, travel blogger and a father. After many traveling adventures, he is now based in Durham, UK. Make sure to check out more of his work and read more of his writing on his website, Instagram, Facebook, and Twitter. This article was also published here and shared with permission.

8 Inspiring Strategies To Consider Otherwise About Your Photography

26 Best Gifts for Photographers for 2023

8 Inspiring Strategies To Consider Otherwise About Your Photography

7 top vacation travel packing guidelines for you and your suitcase

13 Techniques To Find The Best 2023 Travel Discounts And Charges

1 hour ago Lia Obrien
We use cookies on our website to give you the most relevant experience by remembering your preferences and repeat visits. By clicking “Accept All”, you consent to the use of ALL the cookies. However, you may visit "Cookie Settings" to provide a controlled consent.
Cookie SettingsAccept All
Manage consent