Gone are the days of jaw-droppingly low prices on plane tickets. In fact, according to the Bureau of Labor Statistics, airfare has jumped 27.7% in the past year. Although you may not find pandemic flight deals, there are still ways to get a good deal on your tickets.

Here are a few methods you can use to score cheap flights — no matter where you’re traveling to.

This is one of the easiest methods to find deals when shopping for flights. Why? Because you won’t be doing the searching yourself. There are a handful of websites out there that scan flight prices each day and send any notable results directly to you.

This includes sites such as Scott’s Cheap Flights and Thrifty Traveler, both of which notify you when they find discounted ticket prices. Even better, signing up for flight alerts is free — although you’ll likely need to pay to receive business or premium economy class deals.

You can also follow other flight alert sites, such as Secret Flying, which publishes deals as they pop up.

2. Be flexible on your destination

We probably all have that one special place where we’d love to visit, but the truth is flexibility is key when it comes to saving money on flights.

According to Scott’s Cheap Flights, the top advice when it comes to finding a discounted ticket is to be open-minded about the destination. Rather than selecting flights based on the vacation you already have in mind, instead search for cheap destinations on dates that work for you.

Depending on your willingness to be flexible to save money on travel, there are a variety of tools you can use to search for cheap flights. Google Flights is a popular option. The “explore” function allows you to choose your starting location, length of travel and how soon you would like to depart. Then, you’ll be presented with an interactive map displaying prices for various destinations.

Once you’ve picked your travel dates on Google Flights, you can filter the search based on stops, airline, class and price.

Skyscanner also features a robust search function for finding cheap flights. You’ll simply enter a departure destination and select “Everywhere” for where you’d like to travel.

With Skyscanner, you can also choose whether to search for specific flight dates or find prices across an entire month.

A quick search for a flight leaving from San Francisco in October reveals a host of destinations, including a flight to Europe from $374 round trip. 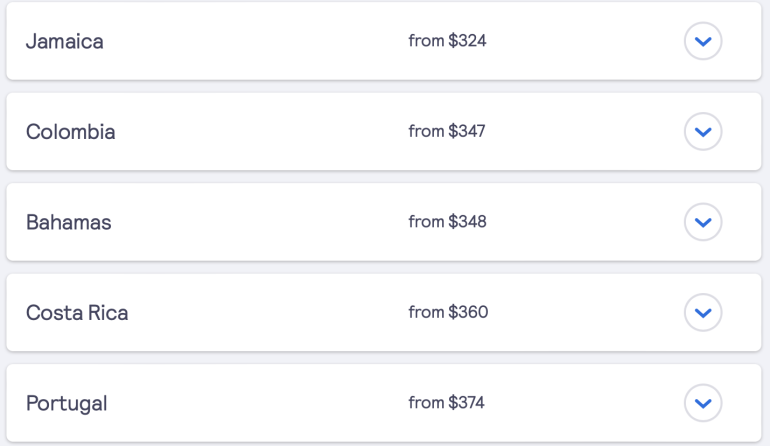 Although it can be a little more complicated to use airline miles for travel, it’s worth the effort. Redeeming miles for flights can drop your out-of-pocket costs down to nearly zero, even when the cash costs for a ticket are high.

Here’s an example of an economy class ticket from Chicago-O’Hare to Kona, Hawaii, leaving in early March 2023.

This same ticket can be bought with United miles. Though to spend fewer miles, you’ll often want to redeem your credit card points with non-U.S. airlines for the same flight. As a member of Star Alliance, Turkish Airlines is allowed to book these United Airlines flights — and the cost to do so is 15,000 miles round trip. The Star Alliance is one of several airline alliances; these partnerships allow airlines to share routes, resources and other reciprocal benefits.

And even though it’s a foreign airline, it’s not difficult to earn Turkish Airlines miles since it’s a transfer partner of both Capital One and Citi.

Capital One Miles and Citi ThankYou Points, both transferable points currencies, transfer to Turkish airlines at a 1:1 ratio, meaning that one credit card point converts directly into one airline mile. Then, you can use the miles to book reward flights.

Every location has its own peak season when you can expect to find more tourists, expensive flights and costly accommodations. However, you’ll do better to head to offseason locations.

Take, for example, a flight from New York-John F. Kennedy to London-Heathrow. Choosing to fly at the end of August means you’ll pay a little under $1,000 for a nonstop flight:

Switching your dates to a lower travel period, such as ones you’d find at the end of February, nearly halves the cost of your travel.

This is true no matter where you’re going, so if you have a fixed destination in mind, consider traveling during the offseason to save money on flights.

In fact, a NerdWallet analysis — conducted in December 2021 of more than 100 airfares on popular U.S. travel routes across eight major airlines — found that airfares averaged 23% cheaper when booked outside of peak season travel.

If you’re looking for flight deals

Although we can’t expect rock-bottom pricing for plane tickets anymore, that doesn’t mean you should be paying huge sums of cash for flights. Instead, take advantage of these tips to find a flight deal.

Laura Yuen: How to travel with just a carry-on — and a few tips if you can’t

Wear the bulkiest items on the plane

No better gift than cash

Make the most of your personal item

You can always do laundry

Flights to Auckland starting under $700 round-trip

How to Get Low cost Flights for Your Journey

Guidelines to help you save on getaway airfare

Vacation journey 2022: Pro predictions and recommendations to help you save cash

Why Does Asian Identity Revolve So Tightly Around Food stuff?

How to save money on gasoline (over and above the obvious)

1 day ago Lia Obrien
We use cookies on our website to give you the most relevant experience by remembering your preferences and repeat visits. By clicking “Accept All”, you consent to the use of ALL the cookies. However, you may visit "Cookie Settings" to provide a controlled consent.
Cookie SettingsAccept All
Manage consent